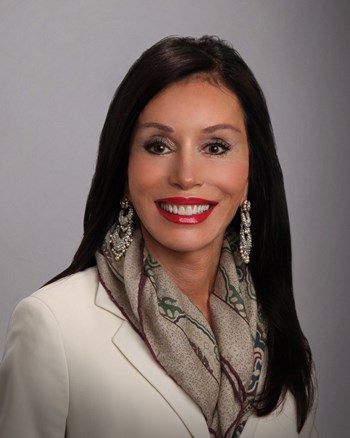 Angelle Grace Ghiz-Wacker serves as Senior Vice President with NAI Capital in West Los Angeles. She has excelled in real estate since 1990, specializing in the sale of investment properties and the leasing and sale of restaurants, movie theaters, hotels, nightclubs, entertainment and hospitality properties.

Angelle has been the recipient of many awards for her record-breaking sales. Prior to entering the real estate field, she worked as a purchasing agent in one of her family businesses, Paddock Pools Patios & Spas, which were in Arizona and Las Vegas, Nevada. Angelle and her family sold Paddock Pools in 2005. She also designed, manufactured and marketed her own swimwear line, Angelle’s Swimwear, in 1985 and 1986 and sold her patterns to Norma Kamali. Angelle was also a co-owner of Paramount Leisure Industries, which was sold to Hayward in 2018. In addition to her entrepreneurial success in commercial real estate, Angelle also became the Founder and Managing Member of Candy Box Productions, LLC in 2009 and has written a slate of television scripts for productions including Dream Chasers, 47 Proposals, Karima, Placebo, Big Shots and Hot Spots, Landlord Wars, Swiss Chocolate and The Phoenix.

Angelle has been involved in commercial real estate transactions globally. She has been a member of ICSC for 12 years and was appointed to serve as Secretary of the NAI Global Retail Council Board of Directors in 2005 where she elevated the entertainment retail council to a whole new level of exciting and innovative retail, restaurant, nightclub and entertainment venues for developers and property owners worldwide. Angelle was promoted to Vice Chairman of the NAI Global Retail Council Board of Directors in 2006 after rebuilding the Retail Council Board by increasing membership and revenues for the company globally. Angelle was to become Chairman in January 2007 when she fell in love with her Swiss banker, Roger Wacker. They married in November 2006 and Angelle decided to gracefully resign the Chair position to stay in the Los Angeles local front to support her new husband and family. Angelle conducted transactions nationally in Arizona, Las Vegas, Chicago, New York, Mississippi, Florida, New Mexico and Texas from 1990-2020. Since her marriage to prominent UBS Vice Chairman, Roger Wacker, Angelle has become involved in lease and sales transactions in Spain, London and Morocco, and has an appetite to become more involved in commercial real estate in Switzerland.

In addition to her busy career, Angelle has been active on numerous boards including The Music Center, Cal-Arts, and Reprise. Since 1998, Angelle has fundraised for St. Jude’s Children’s Research Hospital as a top fundraiser in Los Angeles and was appointed to the Board of Governors that same October in Memphis, TN. Angelle has been a strong advocate of St. Jude’s ever since and continued to serve as a National Committee Member and started the Los Angeles Chapter in 2005, raising over $2,200,000 per year at the Runway for Life galas. She is active in a variety of community and international charitable organizations including The American Cancer Society 1985-2020; The American Heart Association 1988-2020; Easter Seals 1984-2020; Special Olympics 1991-2019; Mayo Clinic Global Advisory Council; Providence St. John’s Health Center Chautauqua Committee; Dream Center advocate and donor; Ambassador for the James Waisman M.D. Endowment Fund for Breast Cancer Research at City of Hope; Century City Chamber of Commerce; Swiss-American Chamber of Commerce 2007-2020; Vice Chairman, Chairman and a board member for The New Majority, Los Angeles.

Angelle works to help abused children and has supported two adopted children overseas since 1994. She continues to mentor numerous Next Generation promisees each year. Angelle loves to play tennis, cook, hike, play the piano, sail on the weekends with her husband on their sailboat, and dance, having won a salsa dance competition in 2010!

Angelle Wacker began her real estate career in Scottsdale, Arizona at Ed Post Realty and Coldwell Banker. She was a member of the Multi-Million Dollar Club at both firms. After moving to California, Mrs. Wacker brought her expertise and skills to Celeste Yarnall & Associates as the Sales and Leasing Director.

Mrs. Wacker has transacted approximately 2,500,000 square feet of office and retail space, representing both landlords and tenants, and has closed more than $600 million of commercial and industrial escrows during her eighteen years in commercial real estate.

In addition to her successful completion of many restaurant and nightclub sales, she is noted for her association and recognition with film and entertainment clients such as Sylvester Stallone, Kenny Rogers, Madonna, Barry Gordy, Kevin Costner, Ben Affleck, Matt Damon and Louis Anderson, as well as many celebrity chef restauranteurs.

A member of the Association of Realtors, Mrs. Wacker is a consecutive five-time winner of the Outstanding Restaurant Broker Award. She currently represents many of Los Angeles's "Golden Rolodex” retailers, restaurants and restaurant/nightclub properties.

Angelle graduated Arizona State University with a degree in Business and a minor in Dietetics. She served as an Army Cadet in college and has studied many foreign languages including Arabic, Spanish, Italian and is now studying German.

Angelle was inducted into The Royal Order of St. Francis I of the Two Sicilies in 2012 and as Dame Commander for her outstanding charitable philanthropy with organizations such as American Cancer Society, The Board of Governors for St. Jude’s Children Research Hospital, The Mayo Clinic Global Advisory Board, The Dream Center, St. Nicholas Christian Orthodox Cathedral, Restaurant Association, Century City Chamber of Commerce, Chairman of The Swiss-American Chamber of Commerce, The New Majority Board Member, Blue Ribbon Board Member, Reprise Trustee and supports Cal-Arts, LA Opera and MOCA.

In addition, Angelle consults with restaurant owners/operators across the United States on menu planning, wine lists, lease negotiations and business opportunities. She is also a member of the ZAGAT Guide. Angelle travels throughout the year to New York, Las Vegas, Miami, Arizona, Chicago, Texas and Atlanta to visit and promote her commercial properties and business. Mrs. Wacker has also flagged hotel and manor palaces in the U.S., Morocco. and London.